The Apprentice, which is the first volume of a two-part saga, is centred on a power struggle between two dragons, Zoldon and Raphael. Whilst Zoldon’s motives are driven by an insatiable desire to avenge the brutal murder of his younger sibling, his older brother, Raphael, is resolute in his ideal of hope and love. 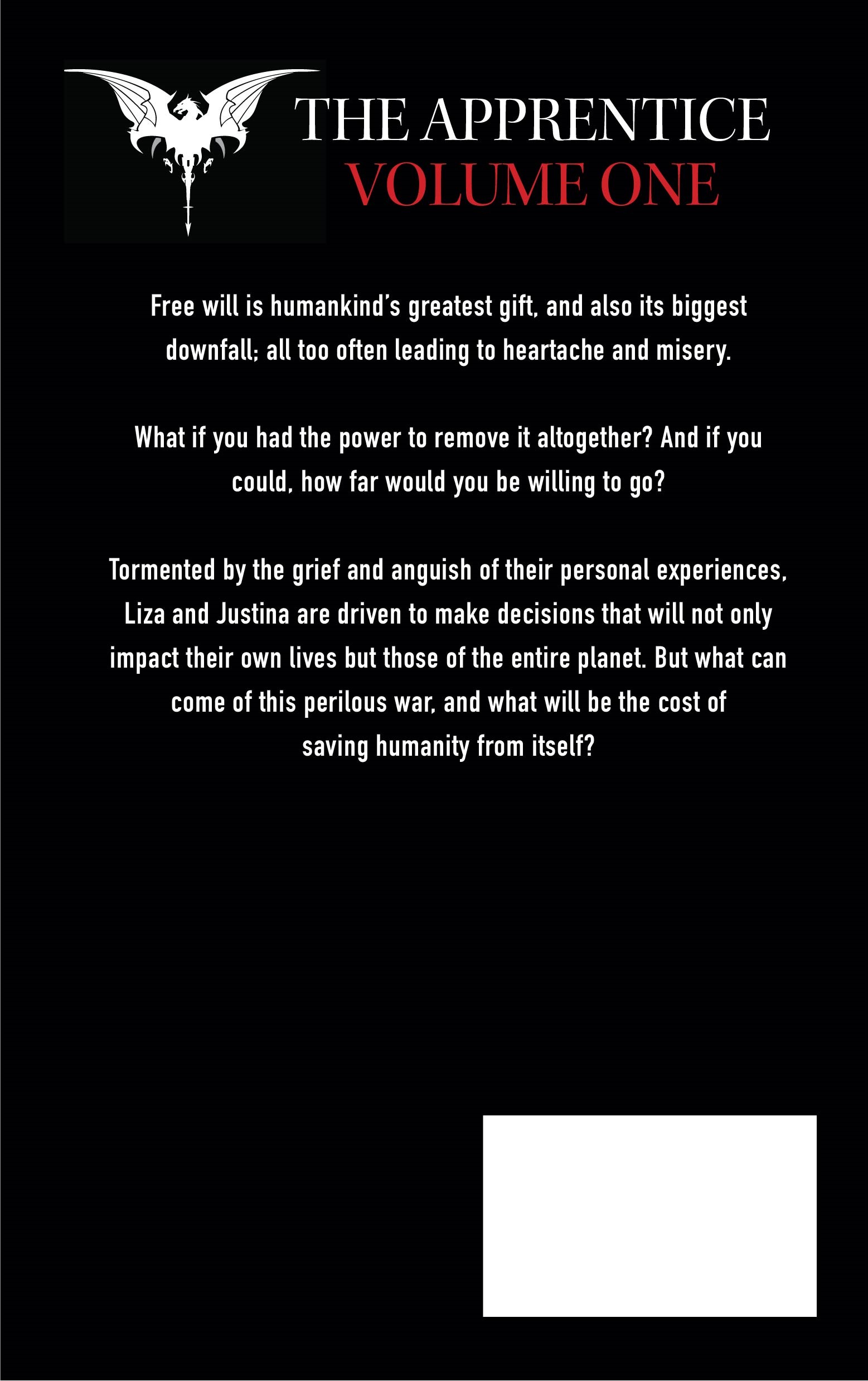 What if dragons really existed?

They once lived in peace and harmony with humankind, right here on Earth. Indeed, they still exist, but are only visible to a select few.

As a result of the malicious act of a handful of humans, the trust and friendship that once existed between humans and dragons is no more. Not only were dragons forced to look for a safer habitat away from the inner realm – Earth – but the majority of them now thirst for the ultimate revenge, the destruction of humankind.

Now dwelling in the outer realm, their knowledge and understanding of how their world and that of humans are interlinked is their greatest asset. For whatever prevails in their world is mirrored by the inner realm. But they are far from united. Whilst the majority are driven by hate and resentment, some hold on to hope, refusing to give up on the ideal of a peaceful and cordial coexistence with humans.

The Apprentice, which is the first volume of a two-part saga, is centred on a power struggle between two dragons, Zoldon and Raphael. Whilst Zoldon’s motives are driven by an insatiable desire to avenge the brutal murder of his younger sibling, his older brother, Raphael, is resolute in his ideal of hope and love.

Both sides must find a way to seize control of their realm, thereby enabling one or the other to determine what happens on Earth. The key lies not in their own abilities but in the mystical powers of two unsuspecting young girls.

The Apprentice is a fantasy adventure novel for tweens, teens, young adults and adults.

Why I Wrote
The Apprentice

As well as a fascination with the supernatural in the form of dragons, I wrote this book because I believe there is a story behind every evil character. Most are evil as a result of a traumatic experience, and usually set out with intentions they genuinely believed to be noble. Does this justify their actions? Certainly not! But I want readers to see both sides of the story.

The Apprentice depicts the existence of different realms, and the ways in which these universes are mysteriously interlinked; and at the core of the story is the notion of free will.

Free will is humankind’s greatest gift. But could it also be our biggest downfall? This is the underlying question of The Apprentice.

This novel not only asks some uncomfortable questions about the heart of humanity but also opens the readers eyes to the reason why certain characters are driven by evil intent. There is always a story hidden beneath their malevolence.

Tormented by the grief and agony of their personal experiences, the lead characters in The Apprentice are inevitably driven to make painful decisions that will not only impact their own lives but those of the entire planet.

Wow!! This is a phenomenal book. Some really deep topics are excellently explored throughout, whilst keeping the storyline constantly engaging and exciting. The characters fit the storyline well (gotta love strong female leads; especially for a young adult’s text), and Akande brilliantly navigates the fictional and fantasial whilst tying the characters into a sense of credibility and believability.

Olusegun has a rare talent for easy storytelling. He has a way of setting a scene with lovely descriptions and creates characters that are immediately likable (even the mean ones!). His narrative skills hook the reader from the very first chapter.


The Apprentice doesn’t disappoint. It is a fantasy story set in a world of Dragons and flits effortlessly between their realms and the backdrop of a girls’ school in the UK.

I love the idea that the realms are parallel and what happens in one affects the other. And the book starts at the end so it hooks you in – making you want to find out how it got to that point. I was hooked!

You are REALLY in your stride about boarding schools. Your descriptions, observations, the detail, the pictures you are painting – all so real and therefore for me so engaging.

The Apprentice is a story that can be read on many levels – it is a fantasy adventure, a morality tale, a book about the power and vulnerability of the human state, or just an exciting read with genuine characters, and a great deal to enjoy. Ideal for the teenage market looking to reignite an interest in reading, or for older readers who want to relive their youth, and challenge their emotions.

The Apprentice is available in both paperback and Kindle ebook.

purchase your copy Today
× How can I help you?